The Downfall of Númenor

As already stated at the beginning of the TTRT series, although the Akallabêth is a separate account from the History of the Silmarils, it is nonetheless part of The Silmarillion as a book: presenting us with the continuation of events at the end of the First Age, with a perspective on the island of Númenor.

It is a fact that from all the works related to Middle-earth, the Second Age is perhaps the least accessible due to the lack of any substantial information.

Our primary sources as to what happens during this 3000-year period consist of a timeline in Appendix B of The Lord of the Rings, a brief account and story in Unfinished Tales, and the ‘Akallabêth’.

My view is that the ‘Akallabêth’ is our most comprehensive account we have available of the Second Age, and is the key to filling up the gap between the events at the end of the ‘Quenta Silmarillion’ and the earliest histories of the Third Age as recounted in The Lord of the Rings.

Akallabêth, the Downfall of Númenor

This account begins with the fates of the three houses of Men after the fall of Morgoth at the end of the First Age. Whilst many Elves repent and sail back into the West, the Valar gift these valiant Men an island amid the Great Sea.

Guided by the star of Eärendil, the first settlers land on Númenor and for the first few thousand years it thrives into a sophisticated and advanced civilization. The groups of men who had stayed behind in Middle-earth fall into a dark age.

Being born from the union between Man and Elf, the sons of Eärendil are given the chance to choose which race to belong to. Elrond chooses to be fated among the Elves whilst Elros attributes himself to Men. 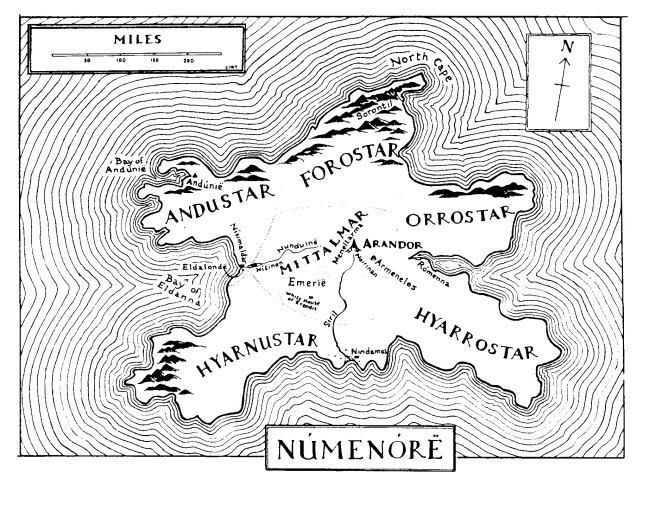 Map of the Island of Númenor

Elros thus becomes the first king of Númenor; gifted with long life, his descendants enjoy similar lengthy life-spans. Under the blessing of the Valar, the Númenóreans grow wise and powerful, almost surpassing the Elves themselves.

They became masters of the sea and travel to the most extreme regions in Arda, from North to South to East. To the West they are forbidden to sail beyond the Ban of the Valar. The could only sail as far West as long as they could still see the shores of Númenor.

Unlike the Elves, the Númenóreans still bore the gift of death. During this time, they forge an alliance with Gil-galad, High King of the Noldor in Middle-earth and assist him in the wars against Sauron: who, after the fall of Morgoth, had refused the pardon of the Valar and established himself a realm of his own.

Slowly, as the years pass by, the ruling figures of Númenor begin to express an interest and a lust towards the potential claim of immortality. Their might increases and, from benevolent visitors, they become the scourge of Middle-earth: raiding and plundering the coasts and driving the lesser Men away.

Ultimately, Ar-Pharazôn, the last King of Númenor, lands in Middle-earth and overwhelms the might of Sauron, taking the dark lord as prisoner back to the island. From captive, Sauron quickly rises to become the king’s most trusted servant and counsellor, who cunningly convinces Ar-Pharazôn that he is powerful enough to invade the Undying Lands.

Ar-Pharazôn and his counsellor, Sauron

Following a few years of preparations, Ar-Pharazôn sets sail with a massive fleet towards Aman. The Faithful, those Númenóreans still allied to the Elves and opposed to the King’s evil agenda, flee towards the West under the leadership of Elendil and his two sons, Isildur and Anárion.

Ar-Pharazôn is astounded by the beauty of the Undying Lands as he finally lands on the shores of Aman. But in that moment, Manwë steps back from the leadership of Arda so that Ilúvatar can intervene. A cataclysmic event unfolds which sees Ar-Pharazôn and his army forever trapped in the Caves of the Forgotten and the shape of the world altered and made round.

Númenor is overwhelmed by waves and sinks to the bottom of the sea, taking with it all its people and Sauron himself. The dark lord barely escapes and is only able to do so by forsaking his body, fleeing as a frail spirit back to Mordor.

Aman is also removed from the physical world, so that any sailor who sets out to explore the West will find himself returning back into the East. Only the Elves, and those specially appointed, are able to find the ‘Straight Way’ towards the Undying Lands.

Meanwhile, the survivors of the Faithful arrive safely in Middle-earth, where the kingdoms of Arnor and Gondor are established.

And tales and rumours arose along the shores of the sea concerning mariners and men forlorn upon the water who, by some fate or grace or favour of the Valar, had entered in upon the Straight Way and seen the face of the world sink below them, and so had come to the lamplit quays of Avallónë, or verily to the last beaches on the margin of Aman, and there had looked upon the White Mountain dreadful and beautiful, before they died.

Oh the shivers of these last lines … breathtaking!