There have been many theories and speculations on the possibilities of who and where Sauron’s greatest servants came from. END_OF_DOCUMENT_TOKEN_TO_BE_REPLACED

– Something else lies “dark” within Arda …

In the early part of the 20th century, Tolkien wrote a short treatise entitled ‘Ambarkanta’ (found in ‘The Shaping of Middle-earth’), relating the shape and layout of the world (Arda) –  sketching a map (amongst several) with all the continents within – namely: Aman, Middle-earth, Harad and the Great Sea.
END_OF_DOCUMENT_TOKEN_TO_BE_REPLACED

The Númenórean fleet and the voyages throughout Arda
END_OF_DOCUMENT_TOKEN_TO_BE_REPLACED

The Númenórean fleet and the voyages throughout Arda

The Númenóreans were, without any doubt, not only the greatest mortal beings, but also the finest mariners in the Second Age. Their skills in the building of ships and 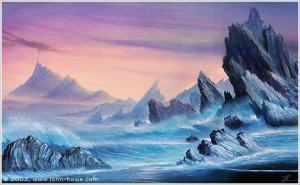 their voyages across the vast seas of the world were unsurpassed by any other race. This article will give a glimpse into the workings of their fleet and how it was organized. Also, it will look into the innumerable navigations that the men of Númenor undertook throughout the wide oceans. I shall be looking mainly at a span of 1523 years: from the first Númenórean ships to arrive in Middle-Earth, until the death of Tar-Minastir, when they began “failing” as a race.
END_OF_DOCUMENT_TOKEN_TO_BE_REPLACED