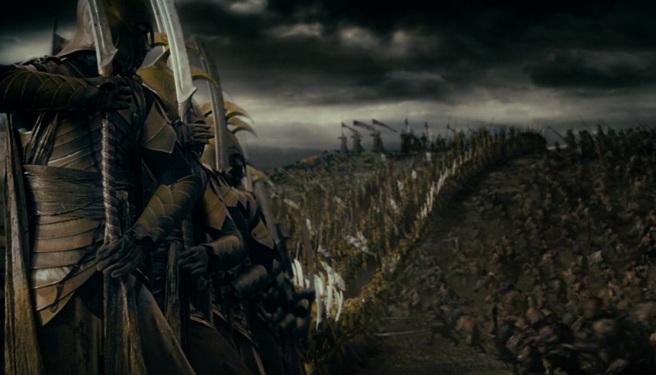 When reading accounts of battles and warfare, numbers are important. They help provide context and scale to the conflict, allowing readers to assess the situation in terms of balance in favour or against an ally or enemy. Which is why I have often found it somewhat baffling that Tolkien gives us so little information on army numbers in his Middle-earth stories.

Despite the plentiful engagements, conflicts and clashes between good and evil, there are only a select few moments when the author divulges any numerical figures.

Tolkien is a great storyteller and knows how to write a battle (The Silmarillion is a pristine example of the author’s skill in this). But despite the epic proportions of his stories, armies are often described as “vast”, “innumerable” or by the vaguely-worded “thousands”.

Whilst reading such passages, I have always asked myself “But how vast is vast?”, “What would an innumerable host look like?”, “Are the thousands of orcs, five or twenty or a hundred thousand?”

Sure enough, there are some examples when Tolkien gives us a hint as to the extent of a battlefield’s size. There are the 10,000 elves who emerge from Gondolin during the Nirnaeth Arnoediad, or the five hundred dwarves at the Battle of Five Armies, the 6,000 (or more accurately, 5,500) Riders of Rohan at the Pelennor Fields, or the 7,000 men Aragorn leads forth from Minas Tirith to the Black Gate.

There are other instances, with some careful reading between the lines and simple calculations, in which readers can come to some approximate figures as to army numbers.

Take for instance the battle at the Black Gate of Mordor. We learn that Aragorn set out from Minas Tirith with a strength of seven thousand men, leaving a strong force at the Cross-roads and others to retake Cair Andros. Once confronted by Sauron:

“The men of the West were trapped, and soon, all about the grey mounds where they stood, forces ten times and more than ten times their match would ring them in a sea of enemies. Sauron had taken the proffered bait in jaws of steel.” – The Return of the King

So by that reasoning, with approximately six thousand men of the Free Peoples, the enemy must have amounted to over sixty thousand – and that figures helps us visualise better the gravity of the situation for our heroes, and the scale of the battle that ensues.

Yet, such figures are few and far between, which often make me wonder what was Tolkien’s reasoning for omitting these details in his writings.

One possible motive that occurred to me was that, it is not the author’s place or intention to provide a blow-by-blow, meticulous account of a conflict. Tolkien is not interested in the nature of the battle itself, but rather he uses it as a means to help move the story further and play out his characters’ arcs through the repercussions and outcomes of the fighting.

So while the strategies and the heroes’ choices are important, the numbers are irrelevant, and to Tolkien it suffices to inform the reader that the good folk are outnumbered or faced with overwhelming odds.

The vagueness of a battlefield’s size taking place in Beleriand or Middle-earth, provides for added authenticity to Tolkien’s tales, where enigmatic and descriptive words outweigh a clear-cut number, allowing readers unhindered access to their own imagination as they are able to conjure up and fill their minds with their own interpretations of what they are reading on the page – a much more powerful storytelling characteristic.

What are your thoughts about Tolkien’s writing of battles? Have you ever thought about this during your reading? Let us know below!

12 thoughts on “Army numbers in Middle-earth”