I recently re-read Tolkien’s short story Roverandom, in which a dog is transformed into a toy and is sent on a fantastical trip to the moon and under the depths of the sea.

In many ways, it struck me how reminiscent the descriptions of the environment were to A Trip to the Moon (1902) and The Mermaid (1904): two historic films pioneered by director Georges Méliès.

The 1902 work of art, synonymous with the bullet-shaped spaceship hitting the man in the moon, is certainly not an exact word-to-image description from Tolkien’s story. Yet, that sense of imagination from two world creators, not yet aware of the bareness of Earth’s natural satellite, had conjured up strikingly similar visuals for what they thought an explorer would encounter on the moon.

As Rover the dog first arrives on the moon, he witnesses the vast landscapes of the moon:

“When he opened them again the moon was all laid out below them, a new white world shining like snow, with wide open spaces of pale blue and green where the tall pointed mountains threw their long shadows far across the floor.”

In A Trip to the Moon, the explorers are equally awed by the sight before them.

For something that has no atmosphere, it’s interesting how Rover encounters snow as he explores the moon:

“Then it began to snow. It often does snow in the moon, but the snow (as they call it) is usually nice and warm, and quite dry, and turns into fine white sand and all blows away. This was more like our sort. It was wet and cold; and it was dirty.”

Interestingly enough, Méliès also thought the Moon would experience a snowfall every now and then. 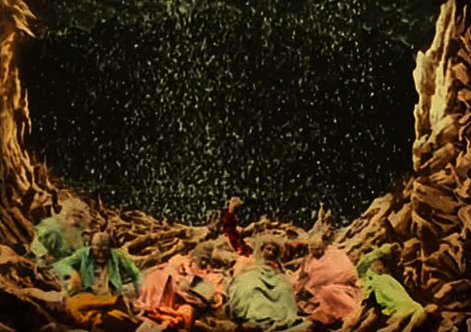 Rover is then witness to the Moon’s beautiful woods, as he ventures inside:

The woods were filled with silverbells all ringing softly together when he first saw them.

The explorers to the Moon also find themselves in a forest, but unlike Rover’s silverbell-filled trees, Méliès’ characters feel more as if they’ve just been inside Mirkwood.

At one point, Rover ends up at the bottom of the sea, inside the mer-folk’s palace. There he observes the beauty of a mermaid and the majestic atmosphere during celebrations.

“… the mermaid really did look beautiful (her tail was in the foam).”

“The mermaids sang inside the palace. How they sang? And all the sea­fairies sang in chorus, and the music floated out of the windows, hundreds of mer-folk playing on horns and pipes and conches of shell.”

“There all the golden­haired mermaids and the dark­haired sirens were dancing interwoven dances as they sang ­ not dancing on their tails, but wonderful swim­dancing, up and down, as well as to and fro, in the clear water.”

The image above is actually from A Trip to the Moon, and depicts the explorers encountering the alien inhabitants of the Moon and taken to the King’s court. The array of colours and design are fascinating, and although not a friendly place as Rover’s current abode, the visuals are striking.

Vaguely similar to the mer-folk, however, is  Georges Méliès’ 1904 film The Mermaid, in which a magician uses an aquarium to conjure up images of a mermaid as he himself becomes Neptune. It’s nothing compared to Tolkien’s descriptions of Rover’s experiences, but there’s something undeniably intriguing about the two mediums – the writing and the filmmaking.

Tolkien would have been 10 to 12 years old at the time the films of Méliès were widely distributed and became an international sensation. It would be interesting to find out whether he was exposed to these works as the birth of cinema emerged. The novelty of film would certainly have left an impression on Tolkien’s young mind, which may have also inspired a work such as Roverandom.

It is quite impossible to prove the argument, but until then, we can all speculate on it being so.

3 thoughts on “Tolkien’s Trip to the Moon”