Something of a Middle-earth Marathon hangover …

So I missed a post yesterday. And yet, I was still exercising my Tolkien Week celebration duties. That back-to-back trilogy marathon took me way beyond what I had originally planned to do.

What I thought would be a day-by-day, film-by-film, viewing turned out into the final 4-film stretch all in one evening.

Instead of spending yesterday evening writing a post about watching The Return of the King, I decided I’d go the extra mile or two to watch the entire Hobbit trilogy after that…

Predicting this was bound to happen, I decided I’d tackle the theatrical versions. Suffice to say, it still took me a good 11 hours from the start of The Return of the King, right through The Battle of the Five Armies.

It was physically exhausting, but it felt great! I still don’t recommend you spend half a day stuck in a chair; and choosing the right time would also be wise.

I pressed the PLAY button on my RoTK disc at around 5pm yesterday. At 3:43am today I found myself rubbing my stinging eyes as Billy Boyd’s song rolled over the credits. 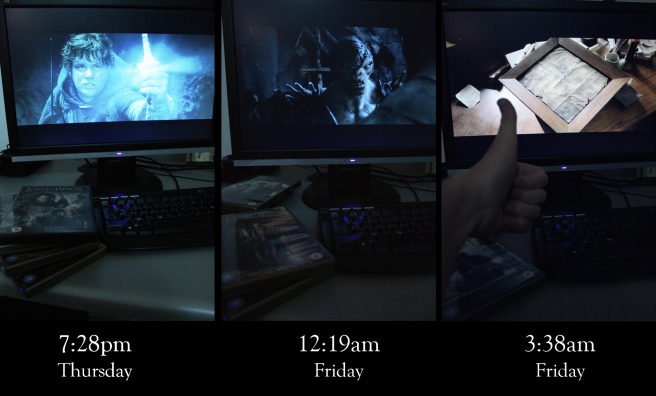 Going to work three hours later was something of a blur, but I couldn’t help maintaining that grin on my face … proud that I had done something so ridiculous, but worthy of a Tolkien Week celebration.

Next up I’ll be moving on to the original source material and plunge myself into the books.

Expect another post soon … unless I suddenly fall into hibernation throughout the Winter.

Caught in the act … someone thought it would be funny to leave the “Bilbo moment” on screen for when I woke up.