The Third of the Great Tales

We’ve come to the climax of the ‘Quenta Silmarillion’ story. ‘Of the Ruin of Doriath’ started the ball rolling which led to the events in this coming chapter.

However, the seed had long been planted way back in ‘Of Maeglin’, the elf who was one of the causes of this disaster.

Through its vast geography, politics and characters, Tolkien manages to fuse one seemingly unrelated event a 100 pages earlier and expand on the consequences of that occurrence later on.

‘Of Tuor and the Fall of Gondolin’ marks the continuing tremendous decline of the Free Peoples in Beleriand.

Chapter 23 – ‘Of Tuor and the Fall of Gondolin’

Having been hidden from the eyes of Morgoth, Gondolin is finally discovered as a result of two distinct causes.

The first occurs after the tale of the Children of Húrin, where a grief-stricken Húrin is released from Angband and wanders back to the Hidden City. In desperation at the loss of his wife and children, he shouts from the top of the Encircling Mountains towards the City, in pain and anger at King Turgon’s seeming indifference.

Morgoth’s plan in releasing Húrin is successful. His cries are heard by spies and the Dark Lord – although still unsure where Gondolin precisely is situated – gives him a clearer idea of where to tighten the noose.

In the meantime, Tuor (cousin of Túrin) sets out on a quest to warn Turgon of the approaching doom. Sent by Ulmo, he arrives safely in Gondolin and is received with honour by the King, who nonetheless does not take his warnings seriously.

The Fall of Gondolin

The next critical factor in the discovery of Gondolin occurs with Maglor (son of Eöl) who, ever since he was brought to the City, has been bitter at the inability to attain the love of Idril, daughter of the King. He is eventually captured by Morgoth and tormented until he is forced to reveal the location.

Morgoth sends a large army of Orcs, Dragons and Balrogs to overwhelm the City. The elves are taken at unawares and a slaughter follows; a slaughter where unparalleled feats of bravery unfold: not least the confrontation between Echtelion of the Fountain and Gothmog, Lord of Balrogs – in which both slay each other. 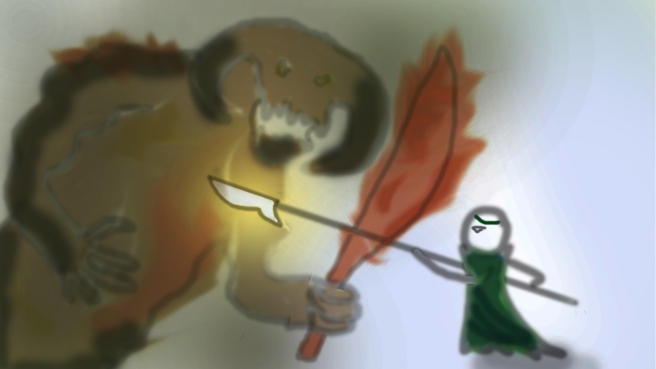 The sack of Gondolin continues but survivors – including Tuor, Idril and their son Eärendil – manage to escape via a secret tunnel that was built prior to the attack. The remaining Elves flee to Balar and mingle with the remnants of Doriath (under Elwing, Dior’s daughter).

Tuor departs over the Sea with Idril in the hope of bringing a message to the Valar for aid. Both are never heard of again.

Morgoth overwhelms Beleriand; the few groups of Men, Elves and Dwarves are scattered far and wide like small islands in a raging sea.

Of the deeds of desperate valour there done, by the chieftains of the noble houses and their warriors, and not least by Tuor, much is told in The Fall of Gondolin: of the battle of Ecthelion of the Fountain with Gothmog Lord of Balrogs in the very square of the King, where each slew the other, and of the defence of the tower of Turgon by the people of his household, until the tower was overthrown; and mighty was its fall and the fall of Turgon in its ruin.