Spirits Only a Gamgee could Master

If you have seen the films, you probably didn’t notice them. But if you’ve read The Lord of the Rings, you most probably remember them clearly. You’ve asked questions, but never got to any revealing answers.

It is ironic how, with all the appendices, letters and thousands of pages on Middle-earth’s history and detail, there are so many mysteries left unraveled by Tolkien.

Case in point are the Silent Watchers guarding the entrance to the tower of Cirith Ungol.

What do we know about them?

Very little, as a matter of fact. Which is precisely the reason why they are so intriguing.

As Sam Gamgee makes his way towards Cirith Ungol on the borders of Mordor, in order to save Frodo, he sees two statue-like figures standing on opposite sides to the Tower’s entrance.

[w]ithin the shadow of the gate he saw the Two Watchers.

They were like great figures seated upon thrones. Each had three joined bodies, and three heads facing outwards, and inward, and across the gateway. The heads had vulture-faces, and on their great knees were laid clawlike hands.

What is most intriguing about these apparent statues is that they are not statues at all. They have the ability to block unwanted entry into the Tower, as Sam soon discovers when he is suddenly pushed back as if he had been hit by an invisible force.

They knew an enemy. Visible or invisible none could pass unheeded. They would forbid his entry, or his escape.

It is only the light emitted by the phial of Galadriel that these unseen forces are pushed back, allowing Sam to pass through unhindered. As he walks through, a Ringwraith-like cry rises up from the statues to signal a warning to the Orcs upstairs.

The Watchers offer more resistance when the two hobbits attempt to escape the Tower.

[…] they felt the malice of the Watchers beating on them, black silent shapes on either side of the gate […]

It is only the full power of Galadriel’s phial that finally breaks the spell and destroys the seated figures.

Tolkien provides us with some answers as to where and how the original “watchers” came to be.

In a heated argument overheard by Sam between Shagrat and Snaga, it is revealed that they were built by the Men of Gondor (referred to as a tarks by the Orcs). These statues were presumably built when Gondor constructed the Tower of Cirith Ungol and the other defences to keep watch over Mordor.

The  first reference to the Watchers occurs in The Two Towers.

As the hobbits debate their best course of action into Mordor, Gollum proposes a secret way amid the mountains; his conversation then dwells on the ever-present threat of being seen:

‘Nothing moves on the road that they [Orcs] don’t know about. The things inside know: the Silent Watchers.’

For the “things” to “know”, a living and conscious entity must have somehow inhabited the statues in order to be able to comprehend its own and others’ existence. A spirit of sorts, perhaps.

They seemed to be carved out of huge blocks of stone, immovable, and yet they were aware: some dreadful spirit of evil vigilance abode in them. They knew an enemy.

This idea of spirits is not as outlandish as it may sound. Ringwraiths robed in black hunt for the One Ring; Barrow-wights haunt the graves of old kings; and other spirit-like creatures populate Middle-earth.

Along similar lines to the Silent Watchers, we know that werewolves in Tolkien’s stories were said to be:

“[…] fell beasts inhabited by dreadful spirits that he [Sauron] had imprisoned in their bodies.”

– ‘Of Beren and Lúthien’, The Silmarillion; Chapter 19

The idea of the evil spirits and the black shapes, keeps referring back to the description of the Ringwraiths: the malice and fear they emit at a distance and the way they blend within the physical and perceivable shadows of the world.

Like the Nazgûl, the spirits within the statues of the Watchers could have been lost souls of corrupt Men that fell under the influence of Sauron, and were thus imprisoned to guard and watch in servitude to their dark lord. 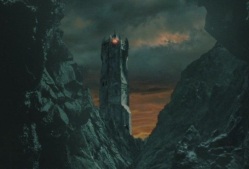 When Shagrat and Snaga are talking about the Watchers being built by the tarks, it seems to indicate the possibility that the Men of Gondor built the statues and embodied them with spirits.

Let’s look at the quote again:

There’s a great fighter about, one of those bloody-handed Elves, or one of the filthy tarks. He’s coming here, I tell you. You heard the bell. He’s got past the Watchers, and that’s tark‘s work.

There are two possible interpretations to Snaga’s final remark:

As stated before, the statues – along with the Tower itself- was built by the Men of Gondor and it is therefore highly probably that Snaga was referring to the second possibility.

But does that mean the the spirits that dwelt within were also the work of the tarks?

Did the Men of Gondor have the ability and skill to conjure spiritual guardians, only for these same spirits to succumb to evil once Sauron had retaken Mordor? Or did the Gondorians simply build the statues and later on Sauron embodied them with spirits?

The fact that these spirits have a physical “grasp” onto the physical world – being able to create this force field and prevent intruders from walking in – remains a riddling concept.

Unlike other spirits (be they wights, werewolves or ringwraiths) who use physical bodies to cloak themselves and interact with the physical qualities of the world, 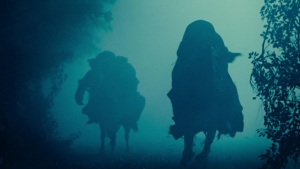 the Watchers seem to be more than just a haunted set of statues.

They are capable of extending their will beyond their own self, thereby creating a tangible system of defence.

Is this invisible wall an actual physical existing barrier or is it more a psychological affliction laid upon the victim forbidding them from moving forward? In other words, was Sam physically hindered from entering the Tower, or was his mental ability to step in blocked by a possessing force that “controlled” his movement?

This is dwelling on the philosophical now, but may help assist in clarifying some evidence on the true nature of the Watchers.

To me, this is what sets these beings aside from others. They are very reminiscent of the Ringwraiths in their unique ability to deal terror and influence at a distance.

The Ringwraiths’ sheer malevolence spreads fear among individuals for miles around. The concept of the Black Breath – a malady that afflicts anyone in close contact with the Nazgûl – is strikingly similar to the Watchers’ “very malice of which made him [Sam] quail” (The Return of the King; Chapter 1).

Sam and Frodo found themselves in a serious predicament with their inability to escape from the Tower. “To move an inch further was a pain and weariness to will and limb” (The Return of the King; Chapter 1) seems akin to the effects of the Nazgûl’s Black Breath.

What can be suggested is that, like the Ringwraiths, the Watchers are unique entities in Middle-earth and are far more complex in nature than Tolkien appears to hint at.

14 thoughts on “What were the Silent Watchers?”