Chatper 7: Of the Silmarils and the Unrest of the Noldor

Free from captivity, Melkor wanders Valinor among Elves and Ainur. His contributions of hidden knowledge help the Noldor to increase their skill in craftsmanship; and for a time Valinor is made more beautiful.

But his apparent fair appearance and reformed character conceal an evil lust towards the jewels of the Noldor and a hatred towards everyone around him.

Melkor spreads lies among the Noldor

By his guile and deceit, Melkor begins to spread rumours of fear and distrust among the Elves: slowly forcing them to doubt the credibility and benevolence of the Valar.

The Noldor are most affected by his lies and, although never trusting the fair guise of Melkor, Fëanor’s own character further isolates him from the Valar.

It is during this time of concealed danger that Fëanor creates the three most beautiful and perfect of jewels to ever exist: the Silmarils.

Capturing light from the Two Trees of Valinor, the elf contains it within three skilfully crafted gems: fashioning them in such a way as to dispel light into a brilliance of colours.

The Silmarils become the praise of all the dwellers in Valinor, but Fëanor – distrusting everyone around him – is wary of showing them in the open: keeping them locked safely away or personally wearing them around his neck. Unsurprisingly, Melkor becomes aware of the jewels and his lust intensifies.

Partly through the pride of Fëanor and partly due to Melkor’s lies the elf threatens his half-brother, Fingolfin, in the city of Valinor. The Valar exile Fëanor and his sons, not to return until 12 years have passed. Thus, he travels north of Aman and establishes a dwelling in Formenos.

Meanwhile, the Valar soon realise the source from which the lies and dissension had spread.

Before they can lay hands on him, Melkor manages to escape from Aman, and for a while remains hidden.

When he saw that many leaned towards him, Melkor would often walk among them, and amid his fair words others were woven, so subtly that many who heard them believed in recollection that they arose from their own thought. Visions he would conjure in their hearts of the mighty realms that they could have ruled at their own will, in power and freedom in the East;

Chapter 8: Of the Darkening of Valinor

After the ousting of Melkor, the peace and bliss in Valinor return. A festival among Elves, Maiar and Valar takes place during the gathering of the fruit from the Two Trees.

As the celebrations take place, Melkor re-emerges from the shadows and travels to the southern parts of Aman, upon the shadowy coasts of Avathar. There, in a never-ending gloom, lives the creature Ungoliant, who had once served Melkor before the creation of the World. Eventually, she descended into Arda and became her own master.

Ungoliant took the visible form of a giant spider, always hungering for light. Thus, Melkor offers terms of allegiance by promising her the greatest source of light in the world: the Two Trees.

Fëanor, having accepted the invitation of the Valar, attends the celebrations without the Silmarils – which have been left locked in his dwelling in Formenos (silly elf!). 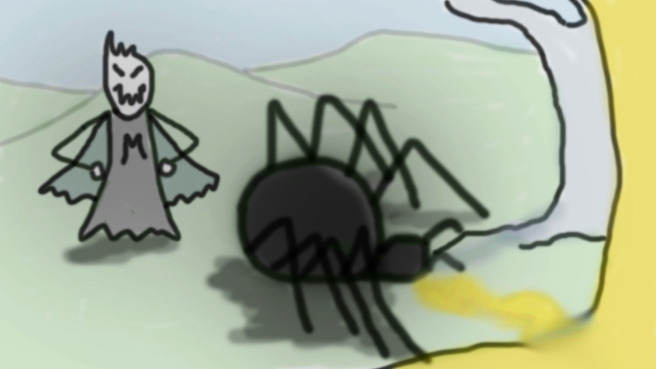 During the feast, Melkor directs Ungoliant to the Two Trees who sucks all the light from them: poisoning their bark and leaving them to rot. The wells of Valinor are also emptied by the insatiable hunger of the spider.

Valinor plunges into a dreadful gloom as the Elves and the Valar moan the death of the Two Trees.

Melkor, making his escape, has achieved another devastating victory.

A cloak of darkness she wove about them when Melkor and Ungoliant set forth; an Unlight, in which things seemed to be no more, and which eyes could not pierce, for it was void.

12 thoughts on “TTRT: The Silmarillion – Chapters Seven and Eight”