I’ve grown rather fond of the final appearance of Bolg in The Hobbit trilogy. Although I had some initial reservations, I’ve come around.

You may probably have noticed by now that the original design for Bolg (and originally Azog – it’s slightly complicated so here’s a link to a detailed post about the design history: Azog, Bolg … and Yazneg: The trio’s tangled design history), has made an appearance in The Hobbit: The Battle of the Five Armies.

He’s the handsome orc who taunts and tortures Gandalf in Dol Guldur; a gatekeeper of sorts left behind to take care of keeping prisoners in the ruined fortress some company.

That is, until he’s obliterated by Galadriel’s fury. 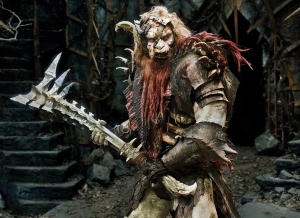 It’s interesting to see his inclusion after all the mishaps and design problems this character has been through.

Seeing how he’s barely visible in this scene, one can only speculate that this was indeed part of a much longer sequence that was to be featured in the original two-film adaptation.

I’m intrigued by how this scene would have worked out in the whole timeline of events, had Bolg retained this appearance. We can also be pretty certain that him being blasted away by Galadriel was added later – possibly during pick-ups.

In a VFX video for The Desolation of Smaug released last year, we were shown the shot prior to Gandalf’s captivity: demonstrating this very same design of Bolg (later replaced by Manu Bennett’s Azog).

After seeing this brief appearance in the third film, one starts wondering whether this Bolg was to be part of the Battle of Five Armies and how his story would have developed from the Dol Guldur subplot.

Things get further complicated once we start asking whether this Bolg-torturing-Gandalf moment was shot when things were in even earlier stages, and that the orc figure was actually assuming the role of Azog.

These are ultimately irrelevant issues in the final result; but it’s always fascinating to speculate how and why things have changed so much.

We cringed at the lack of Dol Guldur behind the scenes features in the extended edition of The Desolation of Smaug.

Here’s hoping we will get an extensive look at how this subplot has changed over time, and why the decision was made to re-include the old Bolg design when he was clearly slain by Dwalin in the Battle of Azanulbizar in An Unexpected Journey.

And after all, would the general moviegoer realise that he’s the same “resusciated” orc, after two years? Perhaps this may have been done intentionally during the two-film adaptation to explain the idea behind the Necromancer raising the dead and ….

Till next time folks!

11 thoughts on “Old Bolg back in The Hobbit!”