The big plus of the final Hobbit film is its urgency. The big minus, is also its urgency.

It may sound contradicting, but that really is how I felt, after seeing the final installment of The Hobbit.

To those who thought that the previous two films dragged along in pacing, Peter Jackson seems to have responded with his most fervent Middle-earth film yet.

In just over two hours, Jackson pulls off the immense task of bringing the story’s major (and most complicated) sequences remarkably well.

Peter Jackson has proven once again that he knows how to create suspense. This is none more evident than the opening scenes, as Smaug prepares to attack Lake-Town.

The rush of the wind; a shadow on the wooden roof tops; the beating of his wings; the terrified stare of a character: the build-up to one of the most terrifying and gratifying sequences in the whole Trilogy is all done through the beautiful subtleties of Jackson’s film-making prowess.

Dol Guldur resonates on a similar scale, with its fair share of creepiness and abundance of horror.

The White Council’s presence in the old fortress makes for an impressive moment, albeit a brief one. Considering this subplot was being constantly built up throughout the previous two films, the sequence is over pretty soon and could easily have made it in The Desolation of Smaug: allowing more screen time to other sidelined characters/moments that were missing in Film 3.

This sense of “leap frogging” is strongly present.

Indeed, Peter Jackson makes us feel as if he is in a rush to move the story forward (something he should have done at certain points in the first two films).

But at the same time, it’s the subtle moments – those character realizations, the “turn of events” situations – that feel somewhat rushed.

No sooner do our characters acknowledge an approaching danger than that danger is already there.

In some instances it seems that not enough time was given to let the emotions and the reactions sink in.

Not just for the audience itself, but the characters too. And I’m not talking about the necessity of long pauses; or deep and serious stares. A few precious seconds on each of the character’s faces would have been enough to maximise the impact of certain moments.

Don’t get me wrong. This was an extraordinary film.

Was it the perfect conclusion to the prequel trilogy? I’m not so sure.

On the positive side, the CGI was top-notch and there were no significant “over the top” sequences which, for some viewers, had plagued the previous two movies (except for the occasional “Leggy moment”).

There is also much to enjoy of New Zealand’s own gorgeous landscape.

Whilst greenscreen was essential for most of the shots, it is obvious that this final installment utilises much more of the natural scenery than the other two films.

Large scale sets also make a triumphant return; the city of Dale in ruins is an impressive construction as a backdrop for the violent clashes between Elves, Men and Orcs. 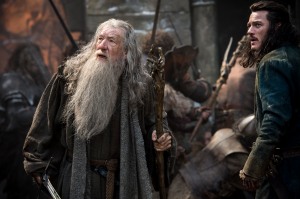 It almost felt like the battle-scarred ruins of Osgiliath at times.

I literally felt I was transported back to a believable Middle-earth: made of real earth, rock, stone, wood and hundreds of extras – rather than CGI effects.

In addition, the action is on an unbelievable scale.

Jackson is a master director when it comes to fight scenes.

The Battle itself is violent, gritty, beautifully shot and ingeniously choreographed. It bears strong resemblances to all the major sequences in The Lord of the Rings; and while it had the potential of being another Pelennor Fields, it did top Helm’s Deep.

That said, I’m expecting to see more scenes in the Extended Edition.

The third act of the film has much need of those grand scale set pieces to complete the resolution of Bilbo and the Dwarves’ journeys.

To be honest, upon my second viewing (in less than 24 hours) the pacing felt easier now I knew what was going to happen. I could fully grasp specific moments and appreciate more the scope of things.

Nevertheless, I’m still unsure about the ending. Whilst there is a resolution of sorts, Peter Jackson did a good job of concluding his Trilogy in a way that isn’t a definitive one: it paves the way to the next Trilogy in the story rather wonderfully; primarily, through the presence of Bilbo.

Speaking of Bilbo, whilst Martin Freeman delivers an even more powerful performance to his character, he has found himself engaged more as a supporting 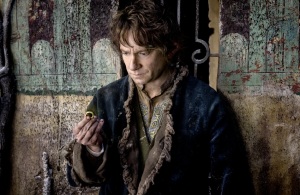 character than taking the primary role.

The real standout is undoubtedly Richard Armitage. His portrayal of Thorin, as he descends into madness, provides a real gravitas to this final chapter. There is real depth to his character’s story that is brought out beautifully.

Unfortunately, the same cannot be said of the other Dwarves (other than Kili: who’s platonic love for Tauriel affects much of the film’s third act). There was much room for further exposition to the relationships in Thorin’s company: but most are left without even any dialogue.

Apart from Thorin, Luke Evans’ Bard leaves his mark with a spectacular lead. Evans embodies the character completely and provides much of the emotional and epic moments in The Battle of the Five Armies.

Once again, this is a fantastic film with breathtaking visuals and some intense moments throughout.

Whilst the third act does not give the punch it promised us, it is nonetheless a worthy conclusion to The Hobbit trilogy and an appropriate introduction to the more complex and grander storylines in The Lord of the Rings.

I shall definitely cherish this film as much as the other 5: a stark reminder of Middle-earth’s cinematic exit … One Last Time.

In the meantime, expect a much detailed review soon.

Have you seen The Battle of the Five Armies yet? What are your thoughts? Share them with us below …