Ever since the release of The Lord of the Rings Trilogy (and now, The Hobbit), film fans have been confusing the timeline difference between the two stories. It is often stated in articles, reviews, news items and in general discussions, that the story of The Hobbit takes place 60 years before the events in The Lord of the Rings.

Now, if you are a fan like me, you perhaps know that this isn’t exactly true.

But at the same time, it is.

In the literary Middle-earth, Tolkien specifically states that the Quest of Erebor in The Hobbit began in the year 2941, when Bilbo accompanied the Dwarves to reclaim the Lonely Mountain. At the same time, we know that Frodo and his companions started their own quest to Mount Doom in 3018.

That is exactly 77 years.

So why say otherwise?

In the cinematic version of Middle-earth it is rather stated as a 60-year difference.

The primary source of this awkward change in dates, is due to the fact that Peter Jackson and Co. (wisely) decided to reduce the time that passes between Bilbo’s Farewell Party and Frodo’s journey towards Bree.

In The Lord of the Rings, after Bilbo leaves the Shire, Gandalf goes on a long expedition of his own – leaving Frodo to live quietly in Hobbiton, whilst he travels the length and breadth

of Middle-earth to discover any trace of the Enemy. Along the way, he is also assisted by Aragorn in trying to capture Gollum and learn about the Ring that has been left in Frodo’s keeping.

In the film, this is reduced to a bare minimum – at most, covering a span of a few days or weeks – when Gandalf comes back to urge Frodo to start the quest. Hence, those 17 years are completely lost and any fans unaware of the book’s structuring of events, will quickly assume that those (slightly less than) two decades do not exist, and instead add up the difference to 60 years.

Which makes sense in the cinematic version.

But then again, why say 60 years when the two film Triloges have clearly followed the correct timelines and dates between the two stories (i.e. 2941 and 3018)?

Proof of this can be found in a scene in The Two Towers, Extended Edition – when Aragorn states his age to Éowyn as being 87. This is correct since he was born in 2931 – 10 years before the events in The Hobbit. 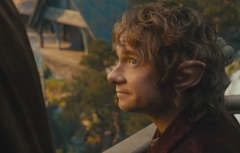 By saying that 60 years have passed between the two, would be implying that Frodo’s quest starts in 3001 – which would make no sense at all.

Conclusion (does it really matter?)

Well, yes and no. Ultimately, as long as you keep in mind that a large chunk of years have passed between the two stories, you’re quite fine.

I’m not sure this post will even make sense to some of you, but perhaps it may be the start of a revolution. A revolution that shifts the perceptions of all those people who take on-board the 60 years argument.

Who knows? After reading this, we might be hearing and reading a more correct term with an 80-year difference (which is certainly closer to the mark).

However, if you’re a real book fan, both you and I know we’ll keep on saying 77 years no matter what … 😉