… from whom Legolas has learnt to be so awesome.

In The Hobbit, Thranduil is the ruler of the elves of Mirkwood. His realm encompasses the northern part of the area, making his dwelling on the borders of that large forest; a vast underground network of elf-constructed caves – better known as the Elvenking’s Halls.

It is here that Thorin and the Dwarves are taken as prisoners, after being captured from their desperate fight against giant spiders. 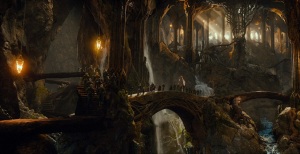 Thranduil comes across as a formidable warrior and a strong leader; both wise and benign, but also possessing a weakness for gems.

Yes, even though he “wrongfully” imprisoned most of the major characters in the novel, he is nonetheless a very likeable character – acting on his own highly-refined Elven instincts, proceeding with caution and with justifiable means.

What Peter Jackson has done to this character in The Hobbit Trilogy, is simply spot-on. Casting Lee Pace as the benevolent, yet highly-suspicious Elven King was probably one of the wisest decisions taken on these films.

Ever since seeing the first official photo of Pace in costume, striking a very characterful pose (this was way back early in 2012, when two films were still in development), my anticipation at seeing him performing on screen was exponentially heightened.

In An Unexpected Journey, we got a very tiny glimpse of the character (yet, two very powerful shots which continued to reaffirm that Pace had “nailed” the personality of

Come The Desolation of Smaug there’s a general outburst of positive reaction towards the performance of the Elven King. This is down to one simple reason:

Lee Pace IS Thranduil. There seems to be no hint of “imitation” or “acting”.

Pace simply manages to blend his acting of the character so subtlety, that what you see on screen is not him playing the Elf King, but rather the Elf king himself – as if he was struck out of the book and magically placed within the cinematic medium.

He brings a very naturalistic element to the character – embodying all his qualities from the novel itself, with some added features constructed by the film’s writers. (Apart from the fact that his face seems to attract a large number of fan girls out there! 😉 ) 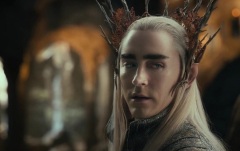 In the handful of scenes (alas!) in The Desolation of Smaug, we immediately get to know who Thranduil is – his characteristics, mannerisms, fighting abilities (oh! that quick-as-lightning, sword-sweeping-movement-into-the-scabbard moment, after beheading a particular orc) and motivations …

The highlight scene is undoubtedly his confrontation with Thorin. Pace manages to convey benevolence, greed, anger, pity, pride, compassion (and a host of other emotions) with just the slightest hint of expressions, the nimblest of gestures or the simplest sophistication of a spoken word.

Legolas may have been the “cool” elf in The Lord of the Rings, but Thranduil’s presence simply tramples all over it …

If you’ve read the book and seen some of the production videos posted online, it’s no wonder you’d be excited to see Thranduil in battle armour for There and Back Again … oh my!