–The race of Men’s own version of Legolas …

Now that The Desolation of Smaug has been released, I can continue discussing the new characters that have become part of the Hobbit story-line – comparing and contrasting them between novel and film.

[Note: Once again, no book spoilers here; but some content in the two Hobbit films will of course, be discussed]

In The Hobbit, Tolkien does not expand extensively on this particular character – other than being a man from Lake- 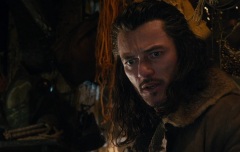 town, whose ancestry dates back to that of Girion the Lord of Dale (the city which was destroyed by Smaug when he came from the North and sacked Erebor).

For reasons yet to be revealed in the third Hobbit film, Bard has always struck me as a particularly interesting character. Thankfully, Peter Jackson has done a wonderful job in fleshing out a very fascinating backstory for this individual – allowing us, as an audience, to immediately like the character and root for him from the beginning.

In The Desolation of Smaug, Bard is also a man from Lake-town whose sole job is to ferry barrels to and from the Woodland Realm. As with the novel, at first he presents himself as a rather grim and solitary figure who is shunned by the rest of the town’s inhabitants.

And whilst the filmmakers have retained his connection to Girion, Luke Evans’ character has been transformed into a widower – in charge of his three children (two daughters and a son – Bain).

Tolkien provides us with information about his son Bain, but there is no evidence to suggest he had any other children. But who’s to say he didn’t have two daughters as well? It certainly is a possibility.

Suffice to say, the character in the film is rightfully portrayed as both a highly skilled bowman and a protector of the common folk  – a kindhearted man who stands against the corrupt politics of the Master of Lake-town.

Furthermore, his character really seems to blend-in with the realistic settings of Lake-town.

If you’ve been following some of the recent stuff I’ve posted on this blog, you may have noticed the constant reference to Bard as being “the Bowman” (see the title to this post too).

Of course, Tolkien himself gives his character this particular nickname from the beginning – and for good reason.

In Peter Jackson’s adaptation, he’s more commonly referred to as Bard the Bargeman, but never as “the Bowman”.

And yet I can’t help but feel that this was a deliberate attempt on the filmmaker’s part to create some “pun” for those who have read the novel.

Bargeman and Bowman have quite a similar auditory pronunciation to them and perhaps it was their intention to emphasize his role as a bargeman in The Desolation of Smaug, whilst highlighting his prowess in archery in the third film … let’s hope it is so.

As much as I was looking forward to Evans portrayal in this second film (and was certainly not disappointed), I’m even more excited to see his performance in There and Back Again and how his character-arc will develop.

Next up, the Master of Lake-town …