Following the sudden increase of interest in anything related to these creatures, I thought it would be good to provide you with the essential ingredients that make up a dragon within Tolkien’s own fantasy world.

This “Guide” is meant to present a clear description of what constitutes a dragon in Middle-earth, whilst at the same time providing a “how-to” list on avoiding being burnt to a crisp by one of these creatures – given by Tolkien himself …

[No The Hobbit spoilers here]

Dragons and Worms: Species and Titles

If you’ve been through all three of Tolkien’s major Middle-earth novels (The Silmarillion, The Hobbit and The Lord 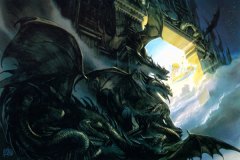 of the Rings), you probably have come across the words “dragon” and “worm” being used interchangeably for pretty much the same creature in question.

But what’s the difference between the two in Tolkien’s fantasy world?

It has to be stated that the type of creature known as a “dragon” was nonetheless also a “worm” as well – still, a major characteristic difference may mean that “worm” refers more accurately to a specific type of dragon (more later).

First, let’s take a look at the names of the only four dragons to be mentioned in Tolkien’s works:

Hailing from the depths of The Silmarillion, the “mightiest of the dragon-host” was Morgoth’s last desperate 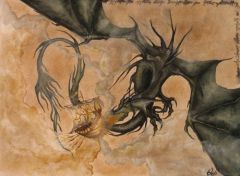 attempt to win over the forces of the Valar during the War of Wrath – in the final stages of Tolkien’s epic.

Ancalagon is said to have battled against Eärendil the Mariner, until finally being defeated – falling down on the towers of Thangorodrim and destroying them.

Perhaps the most famous dragon in Middle-earth after Smaug himself, Glaurung possessed many characteristics similar to his Hobbit counterpart. Referred to as the “father of dragons” in The Silmarillion, he was the first worm to be unleashed by Morgoth on the people of Beleriand. 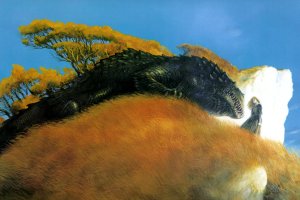 Leaving nothing but destruction in his path – through sheer physical strength and superb cunning skills – Glaurung made himself a comfortable abode in the desolated halls of Nargothrond, gathering “all the hoard and riches of Felagund and heaped them, and lay upon them in the innermost hall”.

He was also responsible for bringing about the many deaths (indirectly and otherwise) within the Tale of the Children of Húrin – proving that he was ultimately a highly intelligent creature and the “Worm of Morgoth”.

Undoubtedly the least-known dragon in Tolkien’s works. Mentioned only in passing in one of the passages from ‘The Return of the King’, Merry the hobbit is given a golden horn by Éowyn at the end of the War of the Ring. This same object was said to be part of Scatha’s hoard in the far north within the Grey Mountains.

The crème de la crème of Middle-earth dragons, and quite possibly of all literary works. Tolkien’s intelligent, sly

and highly flammable dragon is said to have been the greatest in the Third Age (though not the greatest ever – that place is reserved for Ancalagon).

His reputation amongst both fantasy readers (and now more than ever, film-goers) has made this character a truly high-quality dragon.

If you ever have the misfortune of coming face to face with one of Middle-earth’s dragons, be sure to know exactly what they are – as they might just save your life.

Some have no wings (gasp!)

Yes, some of Tolkien’s dragons are wingless creatures, but are nonetheless as fierce and dangerous as their winged-counterparts. Indeed, the title of “worm” seems to refer mostly to these serpents which slither around, heaving their huge bodies by use of their legs.

Glaurung was one such creature and although more commonly referred to as a worm, he was nonetheless a type of dragon himself. 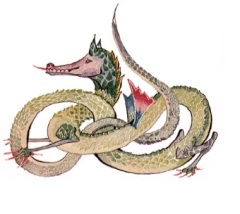 At the same time, there is also a mention of “Long-Worms” and “Were-Worms“.

As previously mentioned, the term “worm” simply refers to a dragon (mostly, of the wingless kind) but considering that Tolkien provides us with “long-worms” (who seem to have infested the Grey Mountains during the Third Age), were of a physically different kind (being longer) than the more common Worm.

Scatha the worm was one such creature – as was Smaug himself after all.

Whether some of these long-worms were also different (from the more common worms) in that they assumed the shape of giant serpents (hence no arms or legs), is also a likely possibility.

With regards to Were-Worms, there is absolutely no further evidence on the existence of these type of dragons except for one small quote made by Bilbo in The Hobbit, during the Unexpected Party.

“Tell me what you want done, and I will try it, if I have to walk from here to the East of East and fight the wild Were-worms in the Last Desert.”

Most likely, this was merely a reference to Hobbit folklore and ancient myths – as was the Last Desert. But if Were-worms actually did exist, then the presence of the word were would suggest that these creatures were shape-shifters, able to take on the shape of either a man or a worm.

– Not all dragons breathe fire (impossible!)

Contrary to the more popular dragon characteristic, some of the dragons in Middle-earth have no capabilities of breathing fire.

During the Third Age, they seem to have had quite a few run-ins with the Dwarves in the Grey Mountains – which was the primary reason for this folk to abandon their homes and re-establish their kingdoms further south and east, in the Iron Hills and Erebor.

Although cold-drakes could not make fire, some creatures of this kind still had the ability to fly. 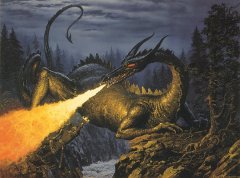 Contrary to these, the Urulóki (or fire-drakes) – naturally – could breathe fire and distinctions also existed between this species. Glaurung and Smaug were both Urulóki, even though the former was a wingless creature.

Unfortunately, considering the vastness of Middle-earth, we do not have detailed information on the characteristics of each type of dragon that existed.

Thankfully, however, we can base some of the main features of Tolkien’s dragons through the abilities displayed by Glaurung and Smaug. Both characters had the faculty of speech, which was primarily used as a weapon against their enemies – and sometimes, was more “destructive” than their fire-breathing skills.

The Dragon-spell was employed by a dragon’s hypnotic stare into the eyes of its victims – enabling it to take control of that person; commanding the will and emotional state of the individual.

Glaurung used this in order to affect the actions of both Túrin and Niënor during the First Age – with disastrous consequences.

Bilbo was also in danger of becoming a victim of the dragon-spell, when he was conversing with Smaug inside Erebor; and was

beginning to doubt whether his companions were true to him or laughing behind his back – as the dragon was clearly suggesting.

Furthermore, this greediness increases if one gazes upon a pile of gold which has been in possession of a dragon for a long time.

In literature, dragons represented human greed at its utmost worse state and therefore, the connection with a gold-hoarding creature is of much relevance. Much of the concept of dragon-sickness occurs in The Hobbit and is a primary motif in the third act of the novel.

How to avoid the wrath of a dragon

Finally, in case you’re wondering along the enchanted paths of Middle-earth, and happen to stumble upon a dragon’s lair and its gold, here are a few words of advice.

It was nice of Tolkien to provide us with a handy guide on how best to approach (or avoid) one of his own creations.

“It does not do to leave a live dragon out of your calculations, if you live near him.”

Never ever make a plan without considering whether a dragon stands along your way. Take a carefully considered approach before proceeding forward (and a good dose of luck).

“Dragons may not have much real use for all their wealth, but they know it to an ounce as a rule.”

It goes without saying, but if you ever find yourself gazing at a hoard of gold (with a dragon on top of it), avoid the temptation to steal something – no matter how small it may be… 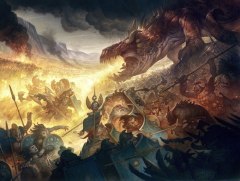 The best way not to infuriate a dragon is to make no eye-contact or any discourse whatsoever. But if avoiding a conversation is impossible, riddle-talk is the way to go. Keep your mind fresh with new riddling words to stay alive. Easy …

Pretty straightforward really. If you value your life, try to avoid making any specific sound which may be perceived as laughter. It’ll probably be the last laugh you’ll ever laugh … huh?

Okay perhaps the above may have stretched the idea of a “quick” guide quite a bit. But I simply had to make sure you would be well prepared to tackle dragons … especially Tolkien dragons – which are of the more dangerous and sophisticated type.

In the meantime, travel safe amidst the wonders of Middle-earth …

(Copyright of the illustrations belongs solely to the respective artists)