Skip to content
HomeUnite! Setting ‘The Children of Húrin’ among the Classics

I’ve already expressed my deep love and “obsession” for ‘The Silmarillion’ (Tolkien’s “greatest” book?) as one of the greatest works in English Literature. However, not everyone may be on the same page as mine when it comes to editorial and “canon” issues.

However, most of us can agree on ‘The Children of Húrin’ (if you’ve read it), as being a stand-alone narrative within Tolkien’s legendarium. I’ve always viewed this work as being a fragment of that former work, which embodies all the essential qualities of Middle-earth and storytelling in general (sometimes at its darkest).

Unfortunately, it seems that ‘The Children of Húrin’ has not received the proper praise it deserves, both from casual readers and Tolkien fans alike – relating it too much to the 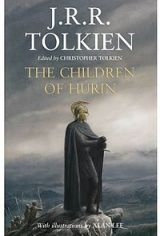 mammoth reading task of ‘The Silmarillion’ and shying away from the “complexities” that rumours seem to surround this work.

I really believe that this book has the potential of becoming a beacon of inspiration for aspiring storytellers and readers wanting to explore new grounds in fantasy literature. So why not unite together and make a statement, propelling ‘The Children of Húrin’ among the modern Classics of the 20th Century?

I’ve you’re unsure where to start, or if you should embark on the long and epic trail of Tolkien’s First Age, head over to a brief, spoiler-free, look on ‘Approaching Tolkien: The Children of Húrin’

And to further make a point, here’s a brilliantly written article on the work by a fellow blogger from ‘The Leather Library’, which I urge you to start following as soon as possible: My Love of the Children of Hurin …

So if you have not yet started reading ‘The Children of Húrin’, you should really start doing so and simply … spread the love!:D

5 thoughts on “Unite! Setting ‘The Children of Húrin’ among the Classics”