So I basically spent the whole of 2003, shying away from people talking about anything related to ‘The Lord of the Rings’. People who had read the book or were simply speculating about how the story was going to end would find me running in the opposite direction.

The journey I had taken over a year and a half before had brought me into this state of incredulous anticipation and my mind was constantly filled with visions of what may happen to each of the characters I had begun to love.

In my eyes, the real world became a reflection of the Middle-earth “to be” in ‘The Return of the King’. Dark clouds reminded me of the impending doom and the threat of Mordor; a cold blast of wind from the West reminded me of the hope carried on by the heroes; the daily journeys from home to school reminded me of Frodo’s own quest to Mount Doom …

But really, my year-long wait DID in fact feel like the hobbit’s “painful” trudge towards the ultimate goal – except, in my case, that goal was a fantastic one. Anyway, ultimately the big day arrived and as I sat down inside the cinema theatre, I couldn’t contain my excitement.

And that was when, the film began …

To say that it reached my expectations (and far beyond), would surely be an understatement. The journey of each of the characters was carried out wonderfully within the main narrative and the entire experience was nothing short of breathtaking. The Middle-earth I had started to love was showing me more of itself for the last time – and in a massive way.

I literally felt like I was within that fantasy world, witnessing all of the events with my own eyes. The depth and the emotions were all present during those unforgettable 3 and a half hours. In fact, I couldn’t remember whether I had ever experienced a film at the cinema in such a way (probably not, until then).

Not only that, but the scale of the battle sequences was increased drastically from the second film. The formula of keeping the audience’s attention on the characters and their own stories was correctly applied once more – making these action sequences the highlights of the entire Trilogy (at least, to my eyes).

The intensity and desperation of the third act’s climax was almost tangible – not to mention the pitch-perfect editing that raised the stakes of the story to the limits.

But, as with everything, there had to be an end; and as the credits rolled-up for the last time, I couldn’t help but feel somewhat said that I had left Middle-earth. Sure, I would always be able to re-watch the films, but it was clear that I wasn’t going to see that world from a new perspective, meet new characters and see other environments. 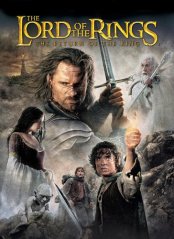 Of course, I had no clue of the release of the Extended Editions. It would only be some 3 years later when I would realize that there was actually MORE than what I had seen (some 2 hours in total, as a matter of fact).

And, as I’ve already said, this was not really an end – but rather the beginning of my appreciation and admiration towards Tolkien and his works. One that, as the years went by, I found myself collecting his books and delving into every piece of text I could find that related to Middle-earth and beyond it.

I had finally found something worth pursuing … a story that meant something.

(In the next post, I’ll briefly explain how I ended up where I am now, in my newly found fantasy interest …)